This post is by no means a definitive guide to the deities known collectively as Datuk Gong, but rather a general overview of their worship.

While I have a great interest in these deities, I know very little about them. What I do know has been acquired through reading online articles, Wikipedia entries and some academic texts; and also from conversations with various people, including those who revere the deities, but, unfortunately, do not have in-depth knowledge of them.

What follows is my impression and personal interpretation of what I have read and heard about Datuk Gong.

What or Who are Datuk Gong?

You will find Datuk Gong shirines under trees, in alleyways or by the roadside in Malaysia, Singapore and (I’ve been told) some parts of Indonesia.

One reason why I am interested in Datuk Gong is because of the deities’ unique status in South-east Asia. My understanding of these deities is that they are a conflation of Tudi Gong 土地公(tutelary spirits) worshipped by Chinese animists and the guardian spirits and/or Muslim saints (known as Datuk Keramat) venerated by the locals.

When the Chinese arrived in what is now Malaysia, Singapore and some regions of Indonesia, they brought with them the practice of worshipping the deity whom they believed presided over their village or town.

These deities have a variety of names, among them, Tudi Gong, Tudi Shen and Tu Gong. Tu (土), by the way, means earth; while di (地) means ground. Gong is an honorific, like ‘lord’, and may even mean, more intimately, grandfather, while shen means ‘god’. It’s worth knowing that the Chinese also worshipped landlord deities, village gods and even city gods. There were guardians at every level to whom petitions for good fortune and prosperity could be delivered. To me, this shows that Chinese folk religion tended to favour covering all bases.

Early Chinese settlers in this part of the world would have been aware of the respect accorded to local guardian spirits and to Muslim saints. Datuk Keramat shrines would have existed in greater number and saint worship would have been openly practised. The veneration of guardian spirits have pre-Islamic animist origins. Thus, these guardians would often be connected to natural objects like rocks and trees. Saint worship, on the other hand, has its roots in Sufiism (now frowned upon by the region’s Muslims who belong to the Sunni denomination) and would have included the veneration of respected members of the community like headmen, shamans, religious leaders and even royalty.

The Banting Thean Poh Keong Temple, in Jugra, Selangor, for example, seems to house a large number of statues of Datuk Gong, including a large one (see below) who is dressed entirely in royal yellow. Although I can’t confirm it, this may be a reference to the Selangor royal family as the old palace and mausoleum are situated in this town. Interestingly, there is also a female figure on the altar — she too wears royal yellow,  including a yellow hijab and a tiara, and her hands are held in the ‘doa’ (Muslim prayer) position. Could this be a depiction of a female member of Selangor’s royal household? Again, I can’t say for sure as no one I have spoken to can identify these statues, either way.

In any case, such veneration of guardian spirits and Muslim saints would have been easily and even naturally incorporated by the Chinese into their own worship of Tudi Gong. Aside from being added insurance that would have appealed to pragmatic Daoists, acknowledging local spirits and saints could also have been one way for these newcomers to integrate into society, and be accepted as part of the community.

More recently, the late great Datuk Karpal Singh has been deified by Malaysian Chinese Daoists. His shrine is in a temple in Teluk Intan and is a reminder that many Daoist gods were once historical figures remembered for brave and noble deeds. 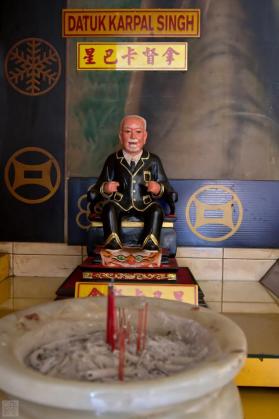 Tudi Gong are usually depicted as old men, and I have never seen a young Datuk Gong either. This makes sense as advanced age is often associated with wisdom and experience, and it’s reasonable to expect the local spirit to be as old as the land it guards.

Datuk Gong statues are usually dressed in a shirt, paired with either sarong or loose trousers. On their heads are songkok or tengkolok, and they hold either a keris (Malay dagger) or walking stick, and gold ingots (a sign of prosperity).

The statues sport a variety of styles of facial hair. Personally, I favour Datuk Gong statues with long, flowing beards. They must be uncomfortable in this weather though! The three Datuk Gong in the picture above each has a different style of facial hair. I am curious about this shrine, in China Town, Kuala Lumpur, and wish I had more information about who these Datuk were/are.

Below are more Datuk Gong statues, each with differently styled facial hair and different headwear:

I’m pretty sure that the appearance of these statues is not based on anyone real, but is solely a result of their makers’ imagination. OK, I don’t know for sure. Perhaps these faces occurred to the artisans in a dream or vision. They may even be based on the faces of friends or family members, although I’m not sure if this would be considered disrespectful of the Datuk.

You will sometimes see Datuk Gong shrines that do not contain a statue or stone. Instead, there will be a plaque with a name/title on it. Most Datuk Gong shrines will display the following Chinese characters on the roof: 拿督公. It says ‘Ná dū gōng’. We can’t ignore the high cost of statues, but shrine caretakers in Malaysia may simply be sensitive to the potentially  controversial nature of the Datuk Gong. As Malaysia is a Muslim majority country, it may be judged prudent to avoid drawing attention to a Daoist shrine that venerates a deity who is Malay and Muslim. After all, there have been occasions where Datuk Gong shrines were vandalised and destroyed.

Datuk Gong are given offerings of flower garlands, betel quid (sliced areca nut, cardamom, cinnamon and tobacco, wrapped in betel leaves, which when chewed act as a mild stimulant), tea, and kemenyan (a kind of incense with a bitter-sweet scent). As the Datuk Gong is usually a Muslim personage, he must never be offered pork or alcohol. If prayers to the Datuk are answered, devotees usually offer their thanks in the form of a feast which includes yellow (turmeric) rice, lamb and chicken curries (the meat must be halal), vegetables, bananas, rose syrup, local cigars and fruit.

Apparently, there are nine levels of Datuk, and each one is associated with different colours and natural elements, or even animals and compass directions. For example, the Green Datuk’s element is wood and his control is directed towards the east. However, I have not been able to verify this information. The links below are to pages on a website which provides the locations and pictures of various shrines, as well as some (unverified) information on eight of the nine Datuk.

The nine Datuk are:

There is some suggestion that each level of Datuk is associated with a specific person who became a saint or was deified upon his death. I’m unsure if each spirit has just one shrine dedicated to it, or if it has various shrines scattered throughout the region. I’m assuming that these are not the only Datuk Gong in existence. In some of the articles I’ve read, the nine Datuk are identified as Datuk Keramat and not Datuk Gong.

The picture on the right is of one of the Datuk statues at the aforementioned Banting Thean Poh Keong Temple. I believe that the tiger he is stepping on indicates that he is the Datuk Panglima Harimau.

I will continue to research Datuk Gong and look out for their shrines in my (limited) travels around the region. Any new information will eventually find my way into this blog. In the meantime, you can view my pictures of Datuk Gong shrines here.

A case study of the Datuk Gong in Melaka.

A Datuk Gong post from Royce’s Book of Magick and Mythology.

One thought on “Datuk Gong”